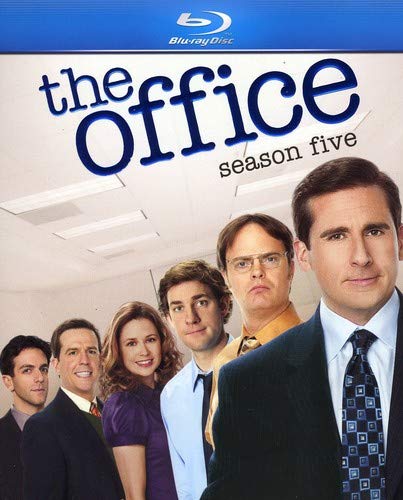 Season Five is not just another day at The Office, delivering break-ups, corporate shake-ups, and a game-changing finale that, as with Jim (John Krasinski), should leave you ecstatic and speechless. The writers continue their masterful handling of the Jim and Pam (Jenna Fischer) romance, taking care of some unfinished business from last season's finale in the season opener with a glorious rain-swept gas station proposal. Their initial separation--while she attends art school in New York--avoids the usual sitcom mechanics ("We are not that couple," Jim states as he aborts a panicked trip to see her). The course of true love is no smoother for "i"The Office's other soul mates, Michael Scott (Steve Carrell) and "major dork" Holly Flax (an Emmy-worthy Amy Ryan), the new HR rep. Meanwhile, Angela (Angela Kinsey) and Dwight (Rainn Wilson) are having office trysts under the nose of her fiancé, Andy (Hangover star Ed Helms, having a breakout season in a career year). On the corporate front, Michael shockingly quits after butting heads with no-nonsense new boss Charles Miner (Idris Elba). In a brilliant stroke, Jim immediately gets on Charles's bad side, much to Dwight's delight. The formation of The Michael Scott Paper Company is a highlight of the season, as Michael and his dream team, Pam and Ryan (B.J. Novak), improbably put a major dent in Dunder Mifflin's sales (but at what cost?). For everyone who wonders how the blundering and tactless Michael keeps his job, it is instructive to get a glimpse of his sales acumen in the episodes "Heavy Competition," in which Michael poaches one of Dwight's clients, and "Broke," in which he negotiates a buyout of his struggling company. The Office's own dream team got dreamier with the addition of Ellie Kemper as "Erin," the adorable and naÃ¯ve new receptionist. "i"The Office still makes for cringe-worthy discomfort television (see a reunited Michael and Holly's excruciating skit at the "Company Picnic" in the season finale), but some of the best episodes are the ones in which the Scranton branch bonds in the face of adversity. A season benchmark is the episode in which the former Michael Scott Paper Company office space is transformed into "CafÃ© Disco" and all squabbles and resentments are forgotten on the dance floor. This season is representative of why The Office is one of television's most DVR'd series. Each episode offers priceless bits of background comic business and charming character grace notes that lend themselves to repeated viewing. Among them: Andy's drunken late night phone call to Angela in "Company Trip"; Pam demonstrating her volleyball prowess in "Company Picnic"; Kelly (Mindy Kaling) setting up one of the series' very best "that's what she saids" in "Customer Survey"; and Andy and Kelly's "dance off" in "CafÃ© Disco." As Dwight notes in "Heavy Competition," "There's a lot going on" in The Office, and in that chaos, this series soars. --Donald Liebenson